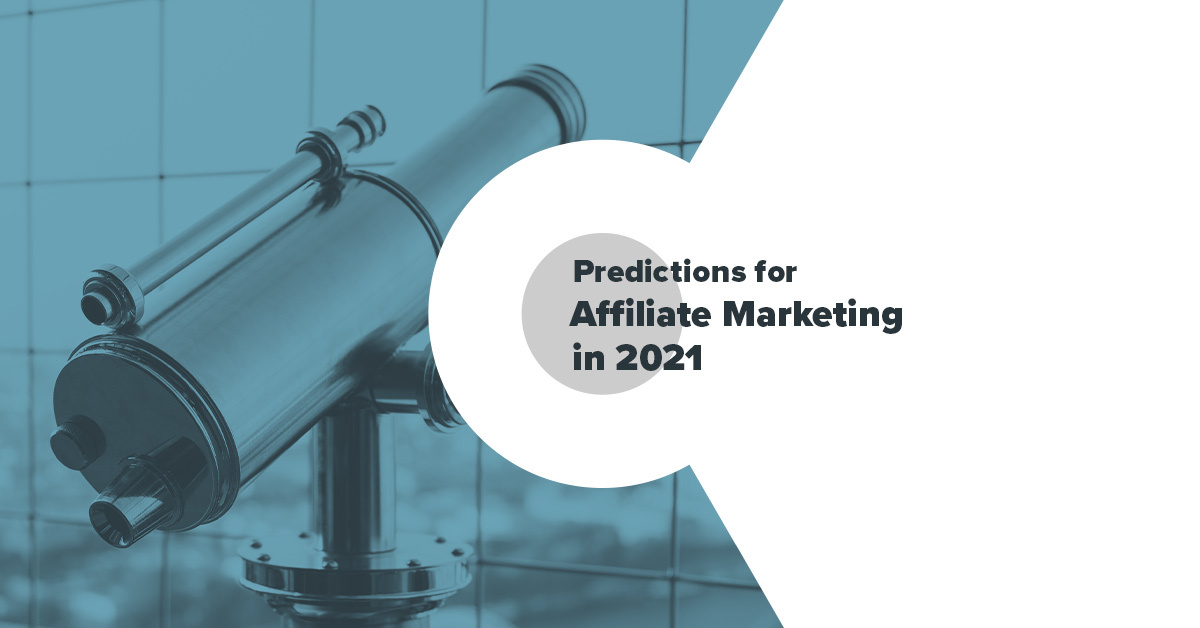 2020 is finally behind us, but it has left its mark on the digital landscape. As an industry which is almost entirely online, we’ve been pretty lucky, however, it is becoming clear that there are some big changes on the way. Now is the time to start looking ahead to see what turns the industry might take so that you navigate the journey ahead.

2020 might be behind us, but we will be living in its shadow for years to come. As a result, every industry is going to have to adapt or die and affiliate marketing is no different. However, opportunity thrives in uncertainty, meaning now is the time to take advantage of future potential.

But what will the future look like? Here are some possibilities for the year ahead to help you take advantage of new areas of interest and avoid the potholes and pitfalls of the new normal.

Words will matter more than ever before

If the sitting US president can be put on Twitter and Facebook’s naughty lists, then marketers don’t have a snowball’s chance in hell if they don’t play by the rules. In 2021, you can expect more policies to be put in place by social media giants to curb the spread of ‘fake news’ and with that, advertising will have to meet stricter guidelines.

One thing to note is that there is no algorithm for truth and, as a result, social media platforms have to make choices, but these choices obviously have their consequences.

Ultimately, they have to choose to place themselves on a spectrum between complete openness and total restriction. However, in both of these, there can still be regulation. The choices made by social media giants today can be seen quite clearly in the distinction between Twitter and Facebook.

Twitter has opted to be more open, yet it allows individuals to choose who can and can’t see their posts and, as a company, they have their own regulations about who can or cannot post on their platform. This has created an open space for debate that has restrictions. Adversely, in 2019, Facebook opted to place more emphasis on groups, allowing people to pigeonhole themselves away and only communicate with people who have similar interests.

Interestingly, Twitter, in being more publicly open, is arguably more restrictive. This is largely due to open ideas facing higher volumes of criticism than those that are squirrelled away in private groups. However, a lot of criticism has been levelled at Facebook for nurturing ‘dangerous ideas’ through groups like QAnon, because unless people within those groups complain, the ideas are able to flourish. Twitter is seen as too censorious, whereas Facebook is seen as not being censorious enough.

To understand the problems faced by social media giants in more detail, check out this video from Tom Scott on why There is no Algorithm for Truth.

But what does this mean for marketers? Social media giants are primarily funded through advertising, and they will not want to lose that. Plus, advertising restrictions are already pretty tight. The biggest effects will likely be on influencers. In the years ahead, influencers will likely be placed under the microscope and, until/unless social media giants go from being platforms to publishers, then people using their services will have to sit under the sword of Damocles. But if restrictions are placed on the people who use a platform, this will have repercussions.

Social media is going to change, whether we like it or not. One of the areas that will probably come under far more scrutiny is the algorithms. You’ll probably start to see more debate about whether giving people what they want is justified. If this happens, then it will be worth watching the debates closely to see which paths they are taking.

The best way to plan for the year ahead will be to focus on authenticity. With the war on fake news still being waged, we’ll likely see new ways of combating disinformation. If you’re using spurious claims and clickbait headlines to get people’s attention, then you’re not alone. Grabbing people’s attention by any means necessary is part and parcel of online survival, whether you’re a charity looking for donations or a major newspaper looking to get engagement, getting people to notice you is the key to success. However, it will be worth using 2021 to test out some new angles.

The attention economy won’t be killed overnight, but at some point, it will have to come to an end and when it does, it will likely be replaced by a system that favours authenticity and puts the needs, rather than desires of the consumers first. What this means is that we will likely see a shift away from algorithms that gain our attention by dragging us deeper and deeper into the rabbit hole, but instead present us with variety. For example, if you like a video about the benefits of being vegan, you might also be presented with videos telling you why you shouldn’t.

Algorithms will switch from being people-centred to content-centred. This would mean that, rather than tracking your every move to discover what you are most likely to engage with, algorithms will try to establish where in the internet of things each item of content belongs and then recommend content based on what you’ve just watched.

If algorithms become content-centric, then it could mean that adverts for health products won’t be shown to people unless they’ve already expressed an interest in certain content that has been authenticated. This would give advertisers more influence over the context of where their adverts are shown but at the same time, limit advertisers who use aggressive tactics.

The Affiliate Landscape for 2021

To get a look at the landscape of affiliate marketing for 2021, let’s first look at the bigger picture.

Is affiliate marketing dead? No!

But, more people are working remotely than ever before, which means fewer people are worried about their bosses finding out they spent all day watching cat videos. Therefore, the market should be ripe for targeting prospective buyers. However, there’s also huge levels of unemployment and people looking to make ends meet. So, while most people might be staring at their computer screens, they aren’t necessarily going to be throwing money at them.

Another thing to watch out for is competition. It should come as no surprise that the search term ‘How to make money online?’ skyrocketed in the first half of 2020.

It’s likely that a lot of people will attempt to break into affiliate marketing in 2021, but how successful they are will remain to be seen. With more jobs likely to become remote, there will be other options out there for people, so affiliate marketing will probably have some competition of its own when gaining fresh blood.

Conferences are a huge part of affiliate marketing and nothing beats face-to-face meetings. 2020 saw the rise of the virtual conference, with some great success, but they will probably remain as additions to the affiliate marketing calendar rather than replacements. As for live conferences in 2021, it still seems unlikely that mass gatherings are going to be permitted in the upcoming months but we’ll just have to wait and see.

2021 probably won’t be easy, but we’ll be right here alongside you. If you’ve got any predictions for what the ear will bring then get in touch and let us know your ideas.