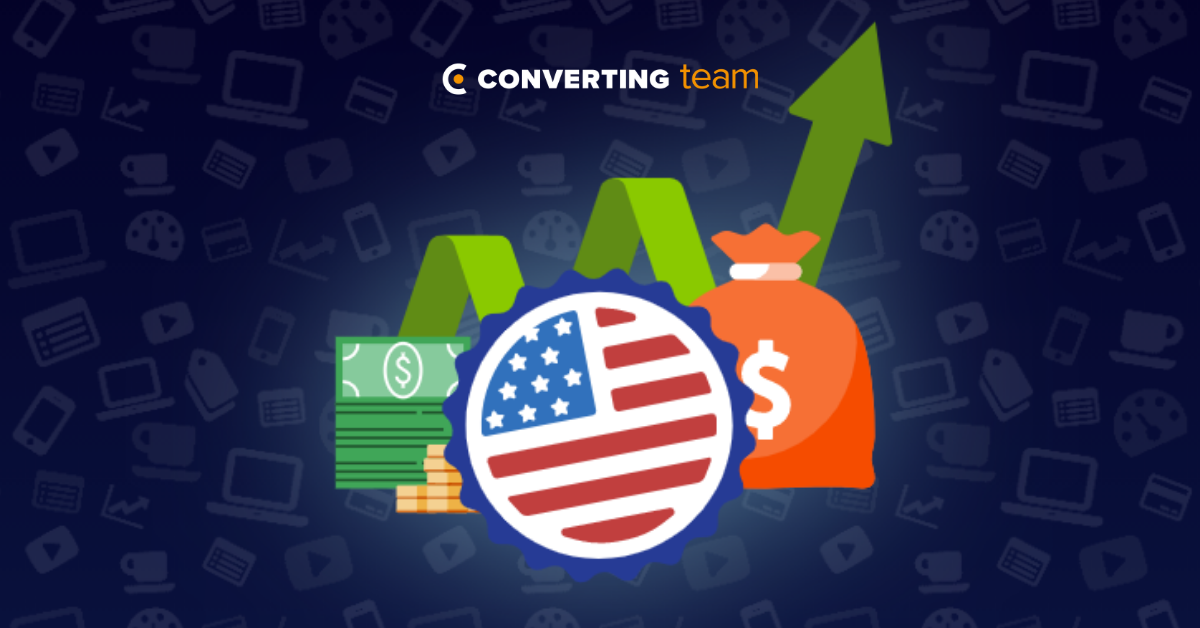 Starting from scratch with something like bankruptcy leadgen in the United States was a big challenge, but one we were willing to take.

Why bankruptcy leadgen in US? When deciding on new verticals, we always ask ourselves:

The United States is a third largest country in the world, both geographically and in terms of population.  Plus, they speak English, which is a huge bonus as it saves time and money on translations, allowing us to produce bigger quantities of quality content.

We need to select businesses that we can advertise on facebook without getting our accounts shut down, which is why we chose leadgen; more specifically white hat leadgen.

Leadgen has a simple flow, as you just need to motivate the client to give his or her contact details. This means that any product or company that needs new customers is a potential partner.

After a lot of testing in the financial sector with home warranty and health insurance offers,  we knew that we could expect good payouts and evergreen traffic flows, especially during the holidays.

When it comes to white hat leadgen in the financial sector, one of the most important aspects is compliance. Therefore, everything needs to be sent for approval.

We always try to focus on testing as many creatives and adcopies as possible, instead of trying to figure out what works and what doesn’t without having the data to back it up.

We test hundreds of different pictures to see what picks up. Usually we split pictures into groups/angles such as people, checks and money, houses, cars etc. We then test those to find out if they get the right CTR.

Here are some of the pictures of cheques and money we tested: This is one of 5 sets of pictures of cheques and money that we used. We did the same with people, houses, etc..

The best performing angles were:

These were best performing ad copies:

😍🙏 “I applied on my phone and got out of my debt even if I owed $XX,XXX. This new bankruptcy company is getting many people out of debt considering ALL applicants.” 💸

We’re here to help. Get a FREE consultancy. The Smartest Way To Handle $10,000+ In Debt

We tested around 25 different ad copies to find out what worked best. Here you can see an example FB ad once the best images and copies were put together: 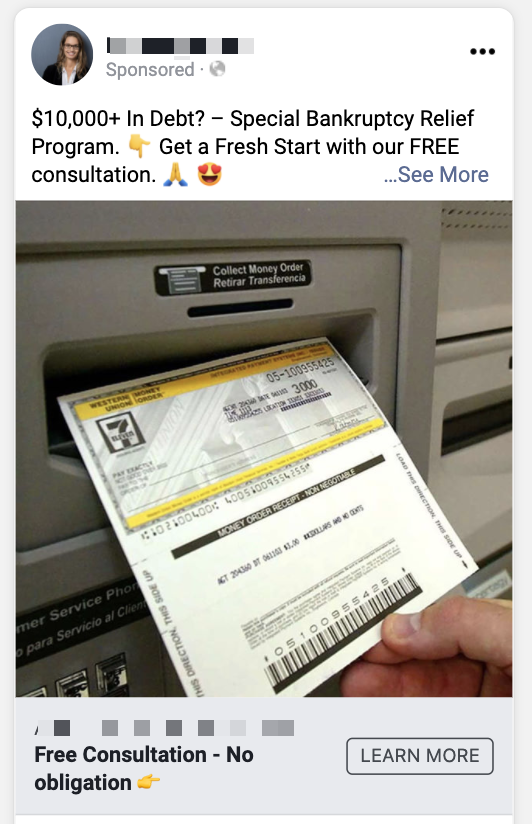 With or without a prelander?

From our experience it’s always better to use a prelander when running ads on FB.

We use the Voluum (link) tracker and select the redirectless option on landers to minimize redirects. Facebook doesn’t like redirects and it can be a reason for being shut down. Also you have more control over traffic when using a prelander in the flow. 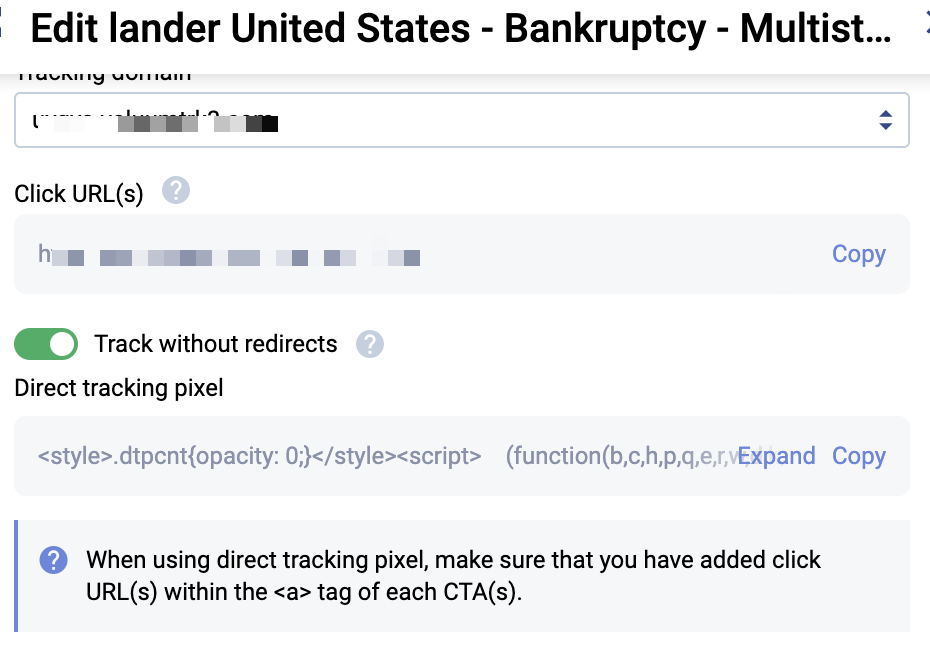 We tested around 15 different prelanders, some of which we found using spy tools and others we created ourselves. As we expected, the unique landers we created in-house worked better. In the end we had two clear winners with the CTRs ranging from 36,94% to 49,32%.

The first winning prelander featured two simple questions. This helped to filter people who were interested from those who weren’t: 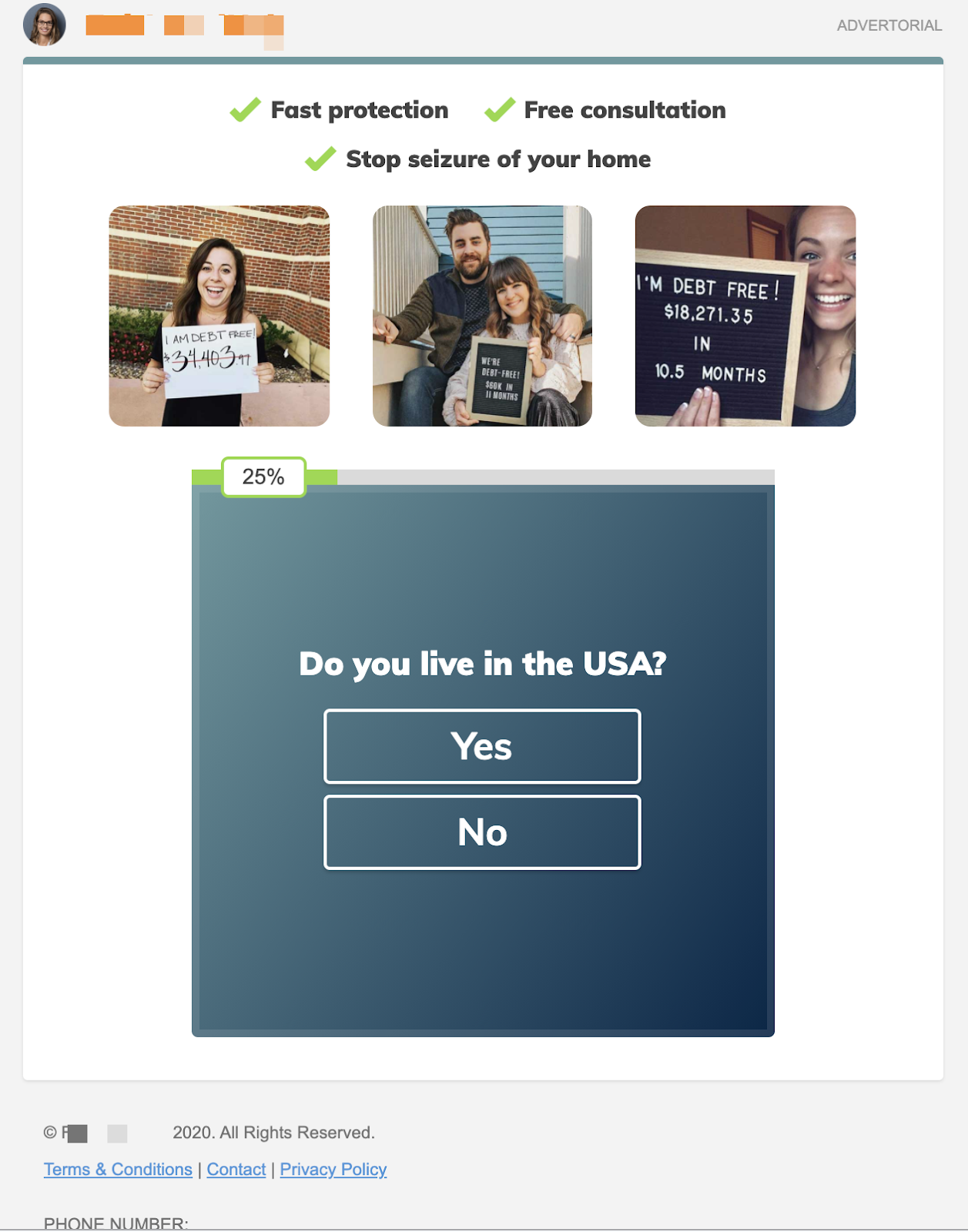 The second prelander was a classic article: You can see here that after first tests the numbers weren’t great:

But after optimization, they got better. By selecting the best performing pictures and ad copies, targeting only the states that were showing good EPC, we achieved better numbers. However, they still not where we needed them to be:

A week or two later we were able to get to the kind of numbers we were happy with:

By gathering more conversions on our pixel, sharing that pixel across multiple ad accounts, and leveraging that collected data, we were able to start generating a nice amount of leads daily.

Also we started retargeting campaigns and LAL campaigns from purchases and started scaling the campaigns. In two months these were the numbers we reached:

As you can see we managed to get a 21% CR on the offer. The conversion was hovering between 15-30% on a daily basis, and this was the average number after 5k conversions.

The CTR on the prelander needs to be around 40%. If it’s not you should work on your prelander with A/B tests until you get close to this number. We never saw more than a 60% CTR.

The suspicious visits you see are bots from Facebook when the campaigns are in a review. You need to check the number of bots using the ISP breakdown and exclude them from your results, especially in the early stages of campaigns.

We were running campaigns on 6 accounts without cloaking. We lost two accounts because of the Circumventing System Policy and the Unacceptable Business Practices Policy - these made no sense since we were running the same things on all of them, but that’s Facebook!

However, we are in for the long term, so we learned from these losses and tried to be more compliant and run less aggressive pictures, even though it cost us some extra money.

We managed to get to around 30% ROI or 1.3 ROAS, which is acceptable for us. After a month of testing and a month running optimised ads, we were able to make $15k profit. It’s a great vertical that will be here forever, especially now with the covid situation in the USA.

Objective: Generate profitable campaigns and gain an understanding of the vertical
Offer: Contact Converting Team for the offer (we tested multiple offers and this was a winner for us)
Payout: Revshare - average CPL around $11
Results: We have managed to consistently run profitably for several months so far, with an average ROI of around 30%. We are still running the offer to this day.