Trolls come in all shapes and sizes, but they all share one thing in common. They want to get a reaction. Sound familiar? That’s right, marketers are trolls too. In this article, we’re going to show you some of the biggest brands who love trolling their competitors and customers alike. We’ll also be giving you some of the top trolling techniques to get you started.

Troll marketing can be incredibly effective, but it’s also really, really risky and if it goes wrong, you can seriously damage your reputation. However, if you are thinking of trolling your competitors and/or customers, then make sure you take a look at how to do it right!

Before we look into some of the most successful Troll Marketing campaigns, let’s first look at what can go wrong.

Back in the early 90’s, Gerald Ratner made a speech which cost him his company. His story is an example of quick ‘joke’ backfiring to tremendous effect and shows how badly badmouthing a brand can go, especially when it’s your own. Now, the name Ratner’s has become synonymous with poor marketing choices.

Ratner’s was once a household name in the UK. The company produced inexpensive jewellery which were widely popular and allowed people from every class in society to accessorise, a bit like Claire’s Accessories today.

Despite it being common knowledge that the jewellery on offer was ‘tacky’ and cheap, the company was still popular. However, just because it was common knowledge, such honesty was not expected from those running the show. Which is why the owner’s 1991 speech to the ‘Institute of Directors at the Royal Albert Hall didn’t go down very well.

In the speech, the company CEO and owner Gerald Ratner joked:

“We also do cut-glass sherry decanters complete with six glasses on a silver-plated tray that your butler can serve you drinks on, all for £4.95. People say, “How can you sell this for such a low price?”, I say, “because it’s total crap.”

Ratner’s honesty resulted in £500 million being wiped off of the company’s value, almost causing the entire collapse of his business. In fact, the company never truly recovered and one year later Ratner was fired and the year after that, the company changed its name to Signet Group, which is still going today, but not with the strength established before Ratner’s remarks.

It just goes to show the power of marketing and how a few poorly chosen words can bring a major business to its knees.

In an age where everything we say and do is in the public sphere, it’s more important than ever that as marketers, we choose our words carefully. However, making divisive statements can also have a positive effect, and can make a major corporation seem much more human. Welcome to the world of Troll Marketing!

If you want to approach the world of Troll Marketing, then it’s best to look at it from the angle of a comedian dealing with hecklers. What can you do to stop people laughing at your brand? Easy, brush it off and laugh at them. Of course, this is not always the appropriate response, so it’s important to differentiate between the right and wrong times to troll. Here is a handy guide to help you out:

- Customers have a genuine complaint.

- When you simply want to outsmart your opponent i.e. look cool in front of your friends.

- When the joke is on you

- When the topic is motivated by race, religion, gender, politics, sexuality etc.

- You can turn a criticism into a positive

- You understand your audience well enough to engage on their level.

- You can limit the risk factor and disguise the complainant.

- The comment you are replying to is irrelevant. (see Wendy’s below)

- Trolling is risky but effective as these brands know. 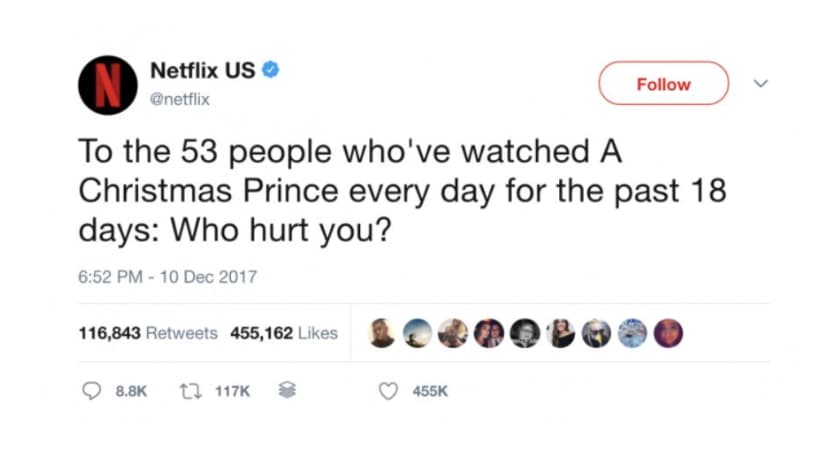 This lighthearted trolling by Netflix came from them looking at their user data. It allowed them to poke fun at a select few of their customers, without any of their identities being disclosed. What’s more, it opened up to others that their viewing habits might not be all that strange.

Wendy’s has become the surprising superhero of the corporate trolling world. Their level of customer engagement on social media has spiked in recent months and they now have a following of over 3.1 million people.

The reason they have managed to achieve this is their attention to detail. Scroll through any one of their posts and you’ll see that they interact all the way down the timeline. If a customer has a complaint, they personally reach out to ensure they rectify it, all the while keeping the level of conversation informal. The result is that they appear less like a company and more like a friend, allowing them to be incredibly engaging.

They also have a little trick up their sleeve! Wendy’s knows that people will ask them stupid questions. And stupid questions deserve stupid answers. Here’s how Wendy’s scores quick points:

There’s something pretty awesome about the contrast of the little girl with red pigtails saying ‘dope’ and it works a charm their customers. They know how to roll with the punches and get their audience excited about interacting.

Wendy’s went viral when they gave one Twitter user the chance to get free chicken nuggets for a year if he got 18 million likes. This gave Wendy’s a lot of free publicity for the price of one man’s appetite. Win/Win! 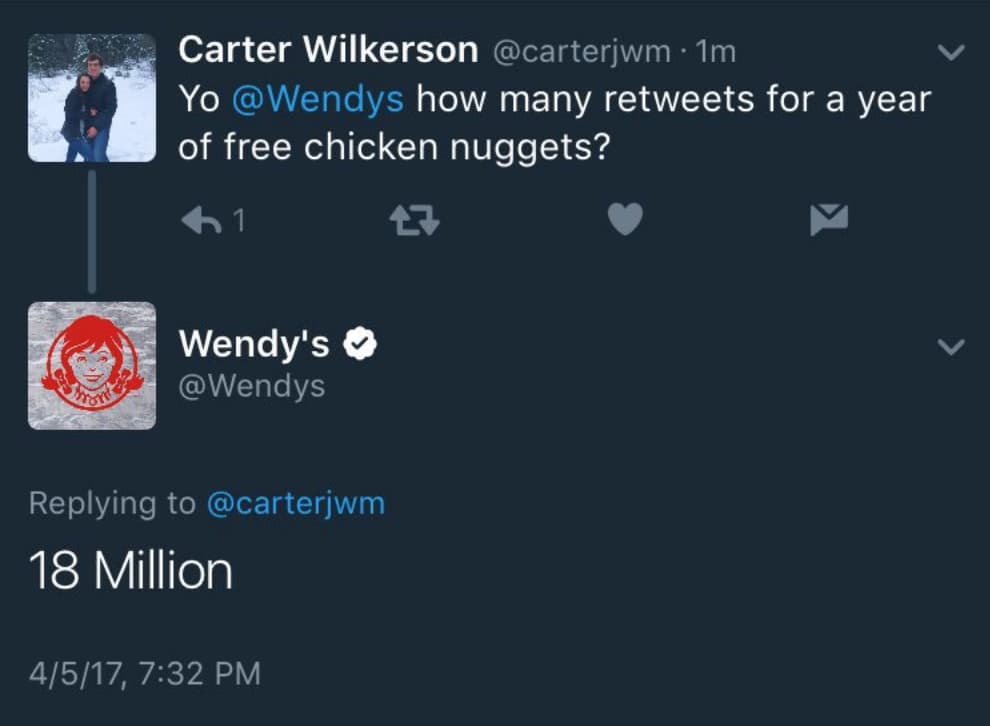 As a result of the appeal, Carter Wilkerson shot to internet fame and was even featured on the Ellen show, eventually receiving a $1000 gift card for Wendy’s so that he could buy what he wanted.

Just goes to show what a little clever marketing can do. One Tweet and a $1000 gift card led to millions of people interacting with the brand. It’s a lot less than you would have to spend with paid advertising for that kind of reach. 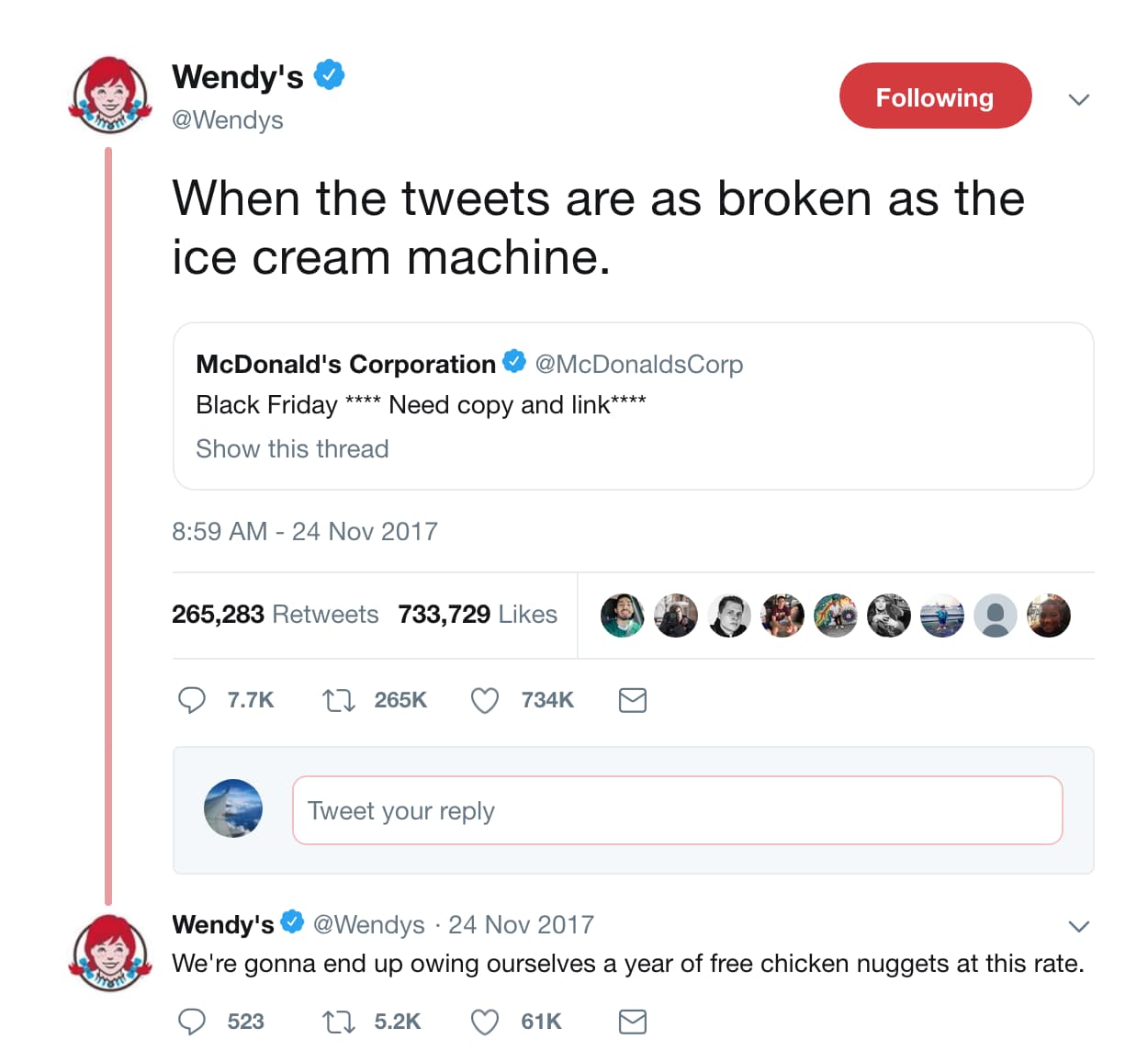 The US makers of fluffy sponge cakes MoonPie are a little more savage in their responses than Wendy’s. Once again, their cutesie persona is nicely offset with an edgier marketing technique, and it works really well. 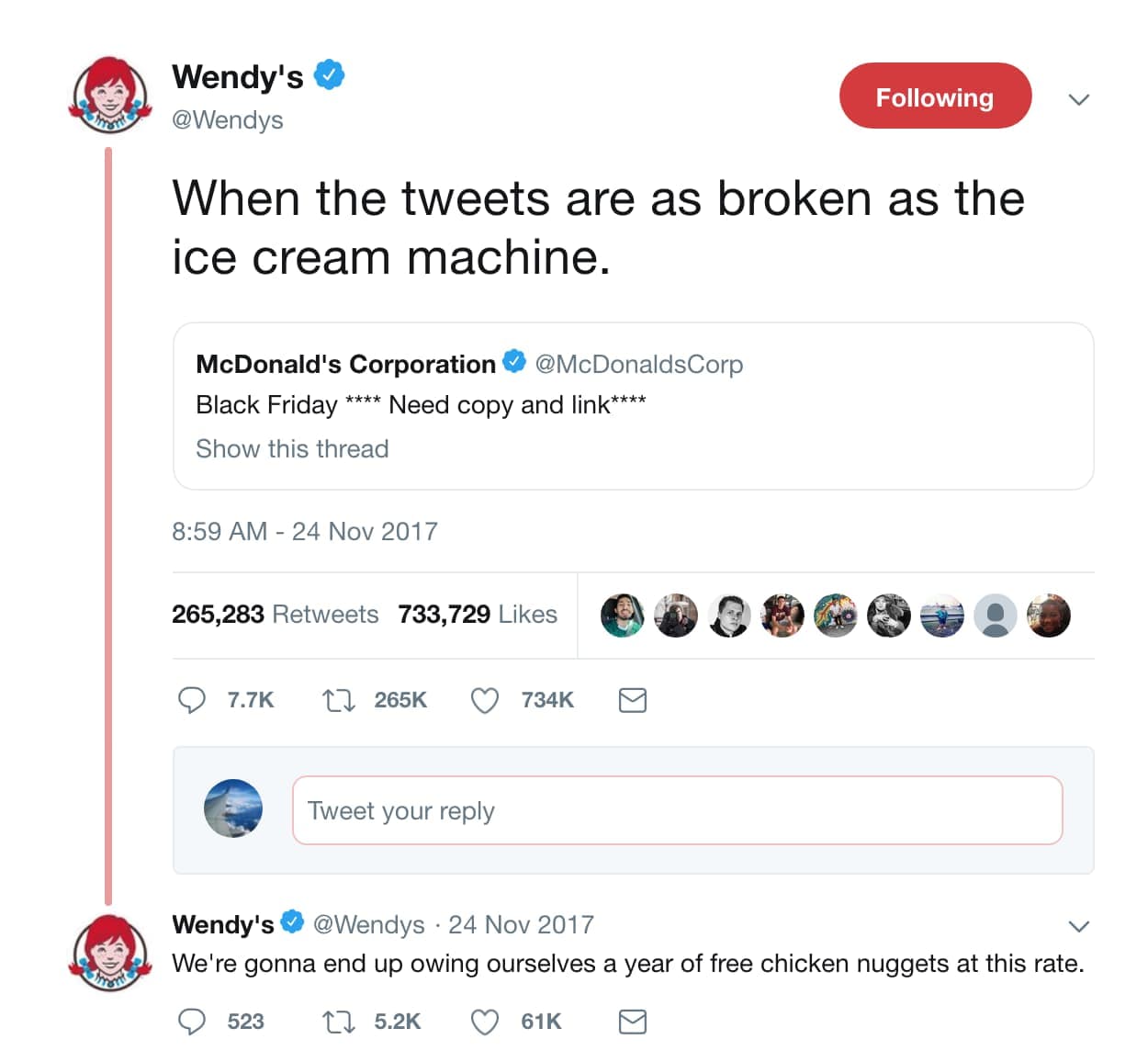 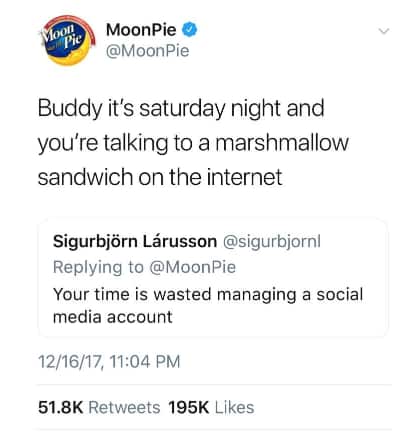 As you can see, they aren’t afraid to call out customers when they are wrong and stick the knife in at the same time. 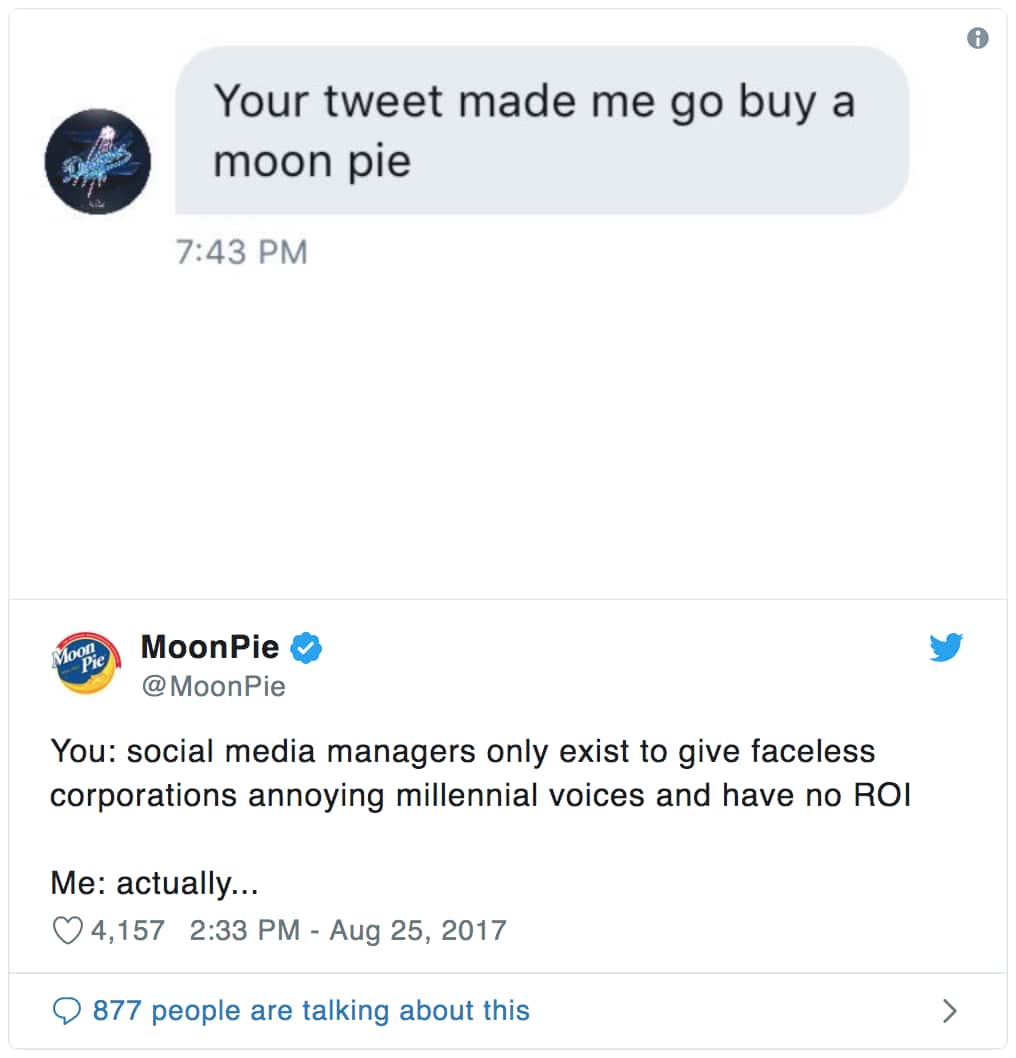 But there is also room for positive interaction between brands, as seen here. 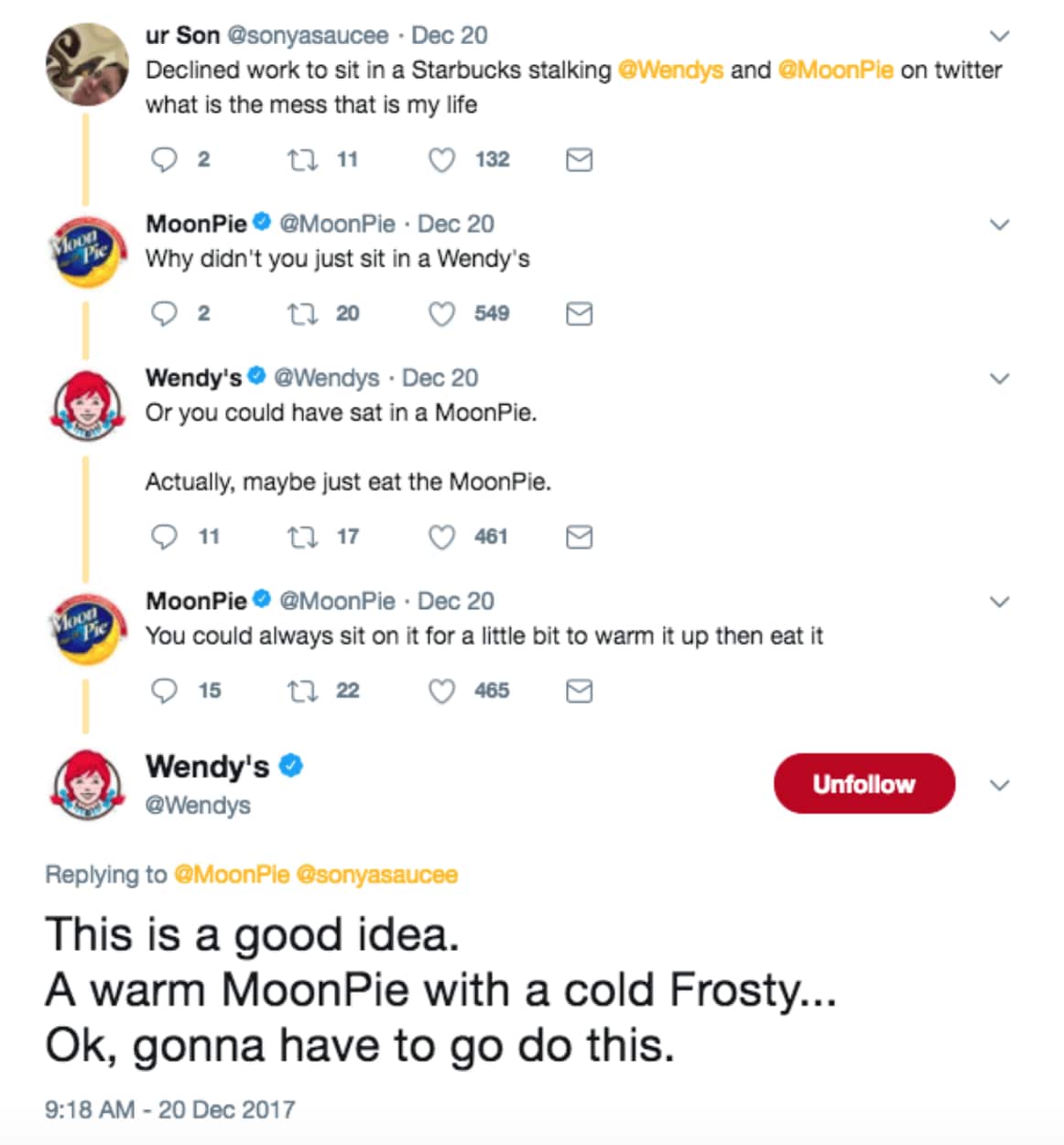 One of the things to take away from both Wendy’s and MoonPie is that it is worth making the effort to engage with customers and interact with them on their level. This style of advertising is relatively new. Both Wendy’s and MoonPie have been experimenting for just over a year, but in that time they have gained a massive following and have been featured across global media outlets.

One of the problems with many affiliate marketing campaigns is that they are faceless, at least where it matters. They revolve around trying to get as many people to buy as quickly as possible. However, it might be worth running just one account where you play with the system and be engaging, as real traffic which gets people talking can be priceless.

Trolling is all about seizing opportunities to advertise is spaces that would otherwise go unused. It’s about engaging with your audience to the point that people want to tell their friends about it. Once you’ve got enough people engaging and sharing things with their friends, word will quickly spread, and you’ll start to see streams of organic traffic flooding in. It takes a little more time, but the pay out can be worth it.

If you want to get all of the benefits of trolling your customers, without the risk, then why not try a few ‘Acts of Kindness’?

Acts of kindness essentially mean you going above and beyond to give your consumers what they want. This isn’t completely without risk, but it’s a lot less riskier than trolling.

If you want to use Acts of Kindness to market your brand/product, then here are a few things to watch out for.

- Don’t offer a level of service above what you can actually handle. Think about it like this. If you drive 100 miles to deliver 1 pizza for 1 person, why would you not do it for another? If you advertise how you went to the moon and back for a customer, then every customer will expect that treatment.

- When you get bad reviews, don’t give people free stuff publicly. Otherwise, everyone will complain in order to get free stuff. Tell them to DM/PM you with their complaint and resolve it accordingly.

- Don’t use politics, religion, race, gender, sexuality etc as your reason for doing something good. It’s ok to link yourself to a charity, but sometimes this can backfire when conscience gets involved. Try to help out individuals for individual reasons, so as not to be seen to be picking sides.

Acts of kindness are very similar to trolling, the only difference being that instead of making jokes, the intention is to make people happy. Here’s an example from UK supermarket Sainsbury’s.

When a little girl contacted Sainsbury’s in the UK to ask why tiger bread wasn’t called giraffe bread, given that it’s distinctive look resembled a giraffe, Sainsbury’s used the opportunity to their advantage. 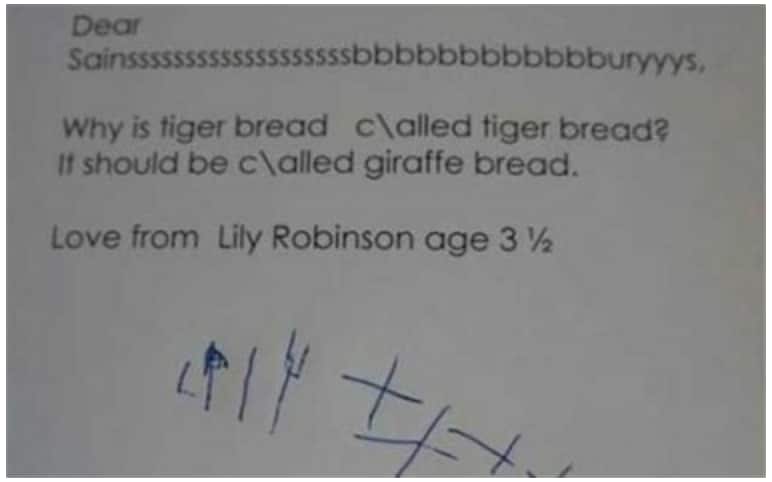 They subsequently changed the name of the bread in all of their stores, and created a viral stir as a result.

This seems like a kind act by Sainsbury’s, and it is, but it is also common sense and shows the company’s willingness to take good advice. Customer comments are a goldmine for marketers, and if you’re not using them then you are missing out.